King Philip, with the assistance of Hermes, ... stealing Persephone! 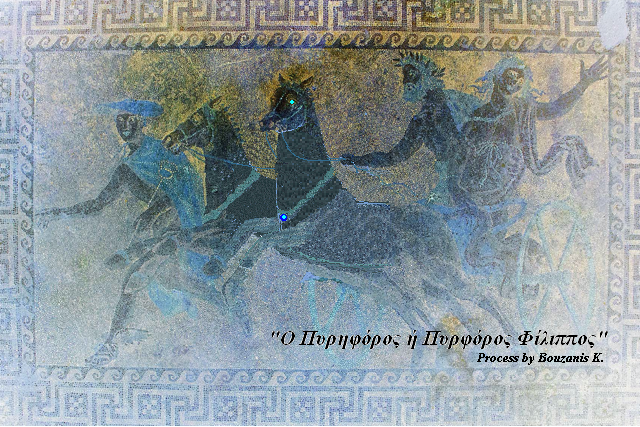 
To archaeologists, scholars, journalists
and others ... Specialists!

Why you insist, Hermes as psychopomp,
accompany someone dead in Hades?
Mind us, in the Tomb of Amphipolis,
- Regardless of the existence of a tomb - the crowned Olympic champion, the King of Macedonia, Philip and Hermes Empolaios **
inspirer and mentor of, in an artistic
execution booster for the conquest of Amphipolis and the opening of one of the Treasures of Amphipolis,
of this gigantic commercial and intellectual center,
the core of the transit trade of wheat *** of granaries of the region of , of , of Colchis etc?
]
Hey, let profytefsoume**** a little!
The damage to the mosaic did it... now!
One insisted publicly that dripped water 2300 years and devoured this at that point! Hold this!
They made a test section looking for the burial, that...knew (!) And instead to find burial there, they found this in the next room! Let it, maybe and below the mosaic,  they found and they hide... the Risen Alexander!
-------------------------------------------------------
* Pyriforos or Pyrforos = the carrier or producer pirou, ie. wheat
** One of the many epithets of the Agoniou, sellers, Minos, Agoraiou, Kerdoou, Eriouniou, Nomiou, phalli, Pylaiou or Propylaiou, Logiou psychopompou etc.. etc.. Kylliniou Hermes!
*** the grains of wheat,  according to the poets, and Greek mythology, is Persephone, the daughter of the Goddess of Grains, Demeter
**** Profytevo = I am preparing  the soil to make the planting or, figuratively, to... write the history!

Think on proportional Representation of a Rapture,
if not wrote the name of Theseus ...
- That remarked Istor -

About burial and graves of M. Alexandrou

Revelation! The Mystery of the Burial of Great Alexander

The Tomb of Amphipolis and ... Nostradamus! (greek)

The Olympic champion King Philip, the Caryatids and the Treasure of Amfipoleos!