Three Palaeo-Linear Inscriptions from Minoan Crete and the... fairy tales of the Linear Scriptures A΄ and B΄!

ATTENTION! The initial read in the Image was corrected as well as the Dictionary

The Ancient World is full of inscriptions with the Common, Global, Eikonogrammato & Palaiogrammiko System of Writing-Reading of ancient speech! 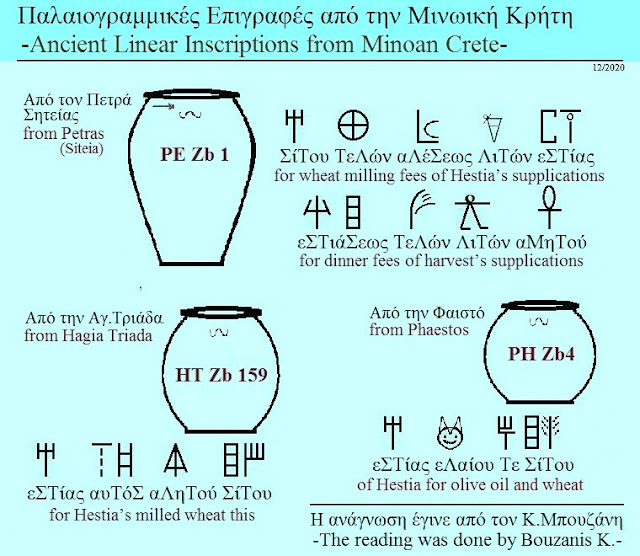 And here, at these pithos from Petras Siteia and Hagia Triada Crete, beats the heart of Hellenism!
(Caution! Do not misunderstand the meaning of the Hellenism) 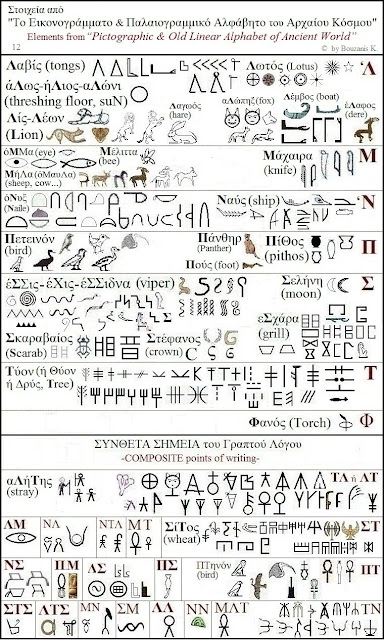 The Written Word at these jars, associated with their specifications, and addressed to the managers of the shopping center or, even, at literate customers-buyers!

From Jean-Francois Champollion (1790-1832), a French scholar, Orientalist, who considered today the father of Egyptology and from the British sages, M. Ventris and J. Chadwick... decipherers of the so-called Linear B, we will point out the confession of the failure of "YES! But other... more voiceless!" and "Half job means nothing around something"!

Partly, then, the Hieroglyph Scripture of Ancient Egypt and Palaeogrammiki Scripture of Greeks have deciphered… successfully! - Someone had something to ... decrypt! -

The Champollion, phenomenon intelligences (... French!), will find his own path through the Supreme Ruler and King, the Ptolemaios, and through Cleopatra, from Egypt of G. Alexander and when luck will not be able to follow him, he will  teach a dual Egyptian Marking and Reading System, based on vocal letters, this one, and the other an ideographic notation!
He will offers the same... cleverness that, a century later, two other sages (... Englishmen!), M. Ventris and J. Chadwick, will decipher(!) the Palaeo Linear Scripture after cleavage of like Linear B΄... it sat for them, and in Linear A΄... it did not made the grace them and stayed to wait, in vain, an American... wisest!

The reasonable person have voice, and in Prehistoric Globalized World, because of trade, could not change the Codes of systems of inscript and reading neither every thousand years!